On 13th September Jackie Le Fèvre and Annie Lawrenson came to the quarterly UKVA meeting to share a story. The story of a unique study that led to a research report called Valuing Support: culture and practice in a person-centred organisation. The report contained some surprises and some encouraging findings for all those interested in stimulating support for values based practice.

About 2 years or so ago Wirral Adult Social Services Department was providing independent living support to a number of learning disabled adults. A decision was made to transfer the provision of this support to an external organisation – a charity called Options for Support Living (Options). The individuals being supported; the budget available to provide the support; the number and type of support hours specified for each individual all stayed the same. Over time staff at Options received unsolicited positive feedback about the lived experience of the people being supported, specifically feedback from families, carers and friends. Something significant had changed and changed for the better.

Led by Louise Barry of Merseyside Disability Federation, with support from University of Liverpool, a research team was formed involving key Options staff and Jackie as the values specialist.

To begin, the first hand experience of different individuals being supported in different ways needed to be gathered systematically to explore whether the good stuff that families had noticed was the general rule or just isolated incidents. The research team explored whether the nationally coproduced Making it Real Markers for Progress  ‘I’ statements could be used as the structure for gathering the stories of people supported. The team mapped the ‘I’ statements to the beliefs and working values of Options and found a high degree of fit. An independent facilitator took the conversation framework out and visited 20 disabled people, 19 of whom were happy to share their experiences.

Insight from the 19 people showed that person-centred support that delivered choice and control was indeed the general rule and peoples’ experience of support was good.

This raised a question about the personal values of support workers, team leaders, leadership team members and trustees connected with the 19 people. Was everyone just doing things in a positive way because they were simply following policy or was there something particular about them as individuals that prompted them to connect with person-centred ways of working?

It is widely thought that the culture of an organisation is the single largest influence upon the way in which it carries out its work and that values are the deepest level of culture that can be reliably mapped and measured. What might the values of the people tell us about culture at Options?

So we embarked upon a values audit using the AVI , an online profiling tool which draws upon the Minessence Values Framework (MVF). It involved all trustees, all leaders, all managers and 30 of the 68 support workers who touched the lives of the 19 people whose stories had been gathered. There are 128 different human values in the MVF. We looked at the most important 10 values for each of the four groups of Options people. We discovered that they all had Human Dignity at the very top. The chances of this being a random result are tiny – the chances of picking a jackpot winning lottery ticket are more than two times greater than the chances of four sets of people sharing Human Dignity as their collective top priority (the chances of picking a winning lottery ticket are in the region of 1 in 14 million……..)

We know that values matter because they shape how individuals and organisations go about doing the work that they do – for example an organisation that values “efficiency” is likely to handle your telephone call quite differently to one that values “courtesy”. Options has over 300 staff and we had only conducted the values audit with 49 of them. We needed to find out whether the spirit of alignment with the Options Beliefs and Working Values, which we had found in the stories told by people supported and in the values audit of a sample of Options people, was actually present in the wider organisation. To do this we used a new approach to measuring staff engagement developed by Professors Goffee and Jones of London Business School which they call their “Dream Company Diagnostic”.

Theory says that if an organisation has high engagement levels this means staff will consciously seek to uphold the values of the organisation and this will lead to people feeling fulfilled at work and able to do their best in their work. Recent surveys in the UK also suggest that as a general rule only around 20% of a workforce say that they are highly engaged. We found 79% of people agreed a lot that they were proud to work at Options and 71% of people agreed a lot that their work was meaningful. 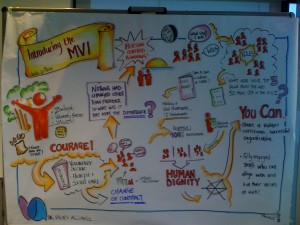 Can it be bottled?

Since it was first published the research report has been presented at a national third sector research conference and shared with a wide range of people from academics to practitioners and policy makers to professional development bodies. The results have been described as “inspiring alignment” and “fascinating insight” but the real value of the work will lie in its use to improve the functioning of social care providers so that more individual people access great support.

This begs the next question – What does Options do that is special and different to create the culture where person-centredness is the heart and soul of every day?

Having finished the study we went back to Options and asked whether or not there were things going on under the four key enablers of engagement namely: visible leadership providing a strong strategic narrative; engaging managers who focus, coach and stretch their people; employee voice; and organisational integrity – no ‘say-do’ gap.  Unsurprisingly there are lots of the practices that create the conditions for engagement taking place in Options: the working values are part of the contract; lots of investment in staff training and development; members of the leadership team taking part in recruitment workshops, and regular staff consultation sessions with leaders and usually the Chief Executive.

But in our view there’s more to it than simply mechanically implementing the various elements of an engagement model. Welcoming the voices of the people supported; deliberately seeking out the views of families and carers; and regular, repeated and relentless challenging of perceived barriers that may stand in the way of people leading fulfilled lives is built in to the very functioning of Options.

We believe what Options has learned to do, and upon which our research has shed new light, can be “bottled” and applied elsewhere. We believe that when providers function in ways that bring the voices of those who know and love the people being supported together with the voices of the individuals accessing support to inspire a consciously values based culture with Human Dignity at heart – great things happen.

UKVA is seeking to promote the conscious use of values in society and the findings of this research certainly reinforce the significance and role of values in both overall workplace practice and the everyday interactions between one person and another.

At its’ simplest what the research shows is that:

·         It is possible to galvanise an entire multi disciplinary, multi site workforce around a handful of big ideas (values)

·         It is possible to explore, record and track values development in a workforce from the level of the individual all the way up through groups and teams to leadership and governance

·         It is possible, even in austere times, for organisations to work in ways that mean individuals provide and receive great person centred support that dignifies everyone touched by the service.

Isn’t it great to get some good news!